Among the many natural products and medicinal plants, anAfrican product well known and exploited for its many virtues is the "King of herbs". But what exactly do you know about this plant with a thousand virtues ?

The king of herbs is an annual plant with an erect stem. Its green leaves are flexible and very soft to the touch, opposite and oval. It is very fragrant and its cyme often has flower heads with white (or pale mauve) or bluish flowers. So you will easily recognize the king of herbs thanks to these characteristics.

One of the peculiarities of the king of herbs is that no herbivorous animal dares to consume it, hence its nickname "king of herbs", because it is believed that the plant is endowed with a  natural "power".

Why is the king of herbs used so much?

The king of herbs has been used for several thousand years in almost all regions of Africa.

In Madagascar, for example, it is nicknamed "brède des jeunes filles" and is widely used as an antitussive remedy.

In Gabon, its uses are numerous. It serves to heal wounds, reduce the symptoms of gonorrhea, alleviate the pain of pregnant women, relieve rheumatism and fever, fight against sorcerers and evil spirits, etc.

We cannot mention its different uses by country here, because it is even used outside the African continent, as in Australia for example or in Latin America, to relieve many ailments.

What are the benefits and benefits of the king of herbs?

Here are some properties and benefits of the king of herbs, as well as how to use it:

·       It is an excellent natural poison repellent:

In most countries where it is used, it is known to be a natural anti-poison. To use it against poison, it is enough to pick the young leaves, preferably in the evening at sunset, wash them well and consume them raw. The same treatment will also be used in case of stomach problems.

·       It effectively unclogs the fallopian tubes:

Women who have blocked tubes and have problems conceiving use them to relieve themselves. In this case, it will be enough to consume the king of herbs dried and made powdered in the form of herbal tea, at the rate of a teaspoon in a cup of warm water every morning on an empty stomach for about 6 months.

·       It is used to relieve painful periods and worms in women:

For this treatment, you will just have to pick the fresh leaves of the plant, then macerate them to extract the precious juice, with which you must purge yourself at the arrival of menses or to relieve yourself of worms of women.

Women also use the juice of the plant as a suppository to clean the vaginal area, as the plant is an excellent antibiotic.

By regularly rubbing the leaves on the affected parts;

In some areas, the king of herbs is used to drive away evil spirits and purify the environment, to protect themselves from night layers (by putting the leaves under your bed or eating the leaves at bedtime). It is also known to him that he attracts luck in business and protects against financial losses, etc.

You now know more about the king of herbs, and its virtues are even more numerous than what is described in this article. In Africa, traditional healers use it in many ways, and even in the mystical realm.

If you want to know more about the virtues of the king of herbs or even get some, it’s available on the website www.fashionistaparis.com 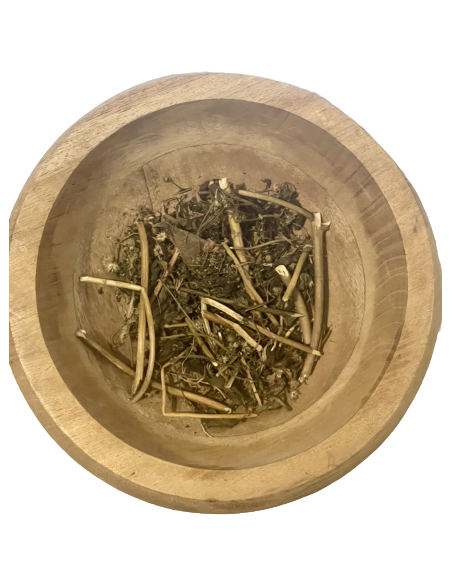